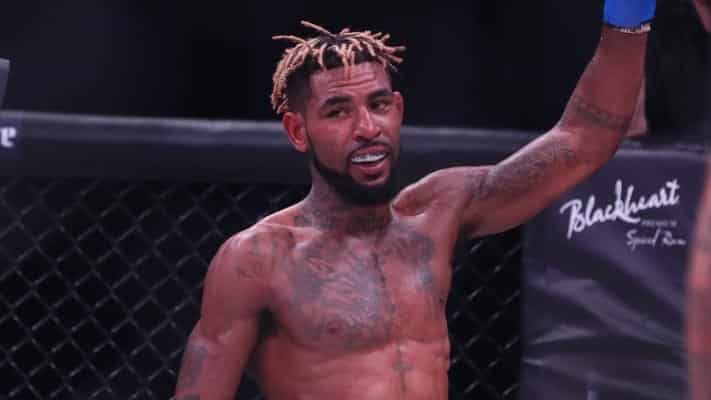 Darrion Caldwell is returning to his old stomping grounds with a vengeance ahead of his bantamweight fight with Leandro Higo at Bellator 259.

The former bantamweight champion is coming off a first-round submission loss to AJ McKee in the semifinals of the Bellator featherweight grand prix and spoke with LowKickMMA about his newly-found motivation ahead of his re-match with Higo.

One of the new additions to Bellator’s 135-pound division is the rankings system, which has motivated Caldwell towards planning another dominant performance against Higo. In their first fight, Caldwell successfully defended the bantamweight championship belt by submitting Higo just minutes into their bout at Bellator 195.

“It’s cool to see the rankings, it’s not that cool not to see me in it,” Caldwell said. “I haven’t been there for awhile, so I’m here to make a statement. I think guys have forgotten just how dominant I am at 135 and this is the fight to go back out there and prove it.”

The 33-year-old Caldwell is still in the middle of his fighting prime and is looking to make a statement in the stacked bantamweight division. Newly-crowned champion Sergio Pettis has impressed Caldwell after his war against Juan Archuleta at Bellator 258 and thinks it’s a good thing to have a champion who’s ready to grind it out with the best of the best.

Bellator president Scott Coker made some news earlier this week when he alluded to a possible Bantamweight grand prix for later this year. After hearing the news from his boss, Caldwell thinks now is the perfect time for him to remind the masses of his dominance.

“I say give me the money, man,” Caldwell said emphatically. “Realistically, I think that’s my tournament. I went further than any other bantamweight in a tournament. And I think if that happens, I’ll be the champ.”

Caldwell has the opportunity to make a splash at Bellator 259 against Higo. After suffering a gut-wrenching loss, he’s looking forward to testing his grit in one of the most intriguing divisions in all of Mixed Martial Arts.

Do you think Darrion Caldwell is still a force to be reckoned with in Bellator’s bantamweight division?